My aim here is to test my understanding of Karpathy’s great blog post “Hacker’s guide to Neural Networks” as well as of Python, to get a hang of which I recently perused through Derek Banas’ awesome commented code expositions. As someone steeped in R and classical statistical learning methods for structured data, I’m very new to both Python as well as Neural nets, so it is best not to fall into the easy delusions of competence that stem from being able to follow things while reading about them. Therefore, code.

One way to understand any node of a neural network is as a gate, which takes in one or more inputs, and produces an output, just like a function.

For example, consider a gate that takes in x and y, and computes: f(x,y) = x * y Let’s implement such a gate in Python:

Similarly, we can have a gate that computes the sum of its two inputs.

And a gate that computes the max of its two inputs

Think of the goal of the circuit as to maximize the output. This is the optimization problem for the neural network (actually it is to minimize the loss function, but the difference is trivial for that’s the same as maximizing the negative of loss function). Now it becomes crucial to identify how to modify the inputs a little bit, to make the output a little larger. If we are able to devise a method to identify that, we can try that method again and again to get successively larger values of the output, until we hit a wall and the output ceases to increase. At that point, we will say that we have maximized the output, at least locally.

Illustration with a simple circuit with just one gate, the forwardMultiplyGate

Suppose that the forwardMultiplyGate defined earlier is the only gate in our neural network. How we want to tweak each input depends on the output’s sensitivity (or response) to changes in that input. Since the output is essentially a function of the inputs as shown before, the sensitivity of the output to each of the inputs is just the partial derivative with respect to that input, let us compute that:

Since the gradient is positive, increasing x a little bit should increase the output. Let’s check:

Just as we expected, the output increased.

If we provide 3 and 4 to such a gate, it should try to bring x and y closer together such that the output is maximized. It’s trivial to see that this function is maximized at x=y

See the following for a visual aid: 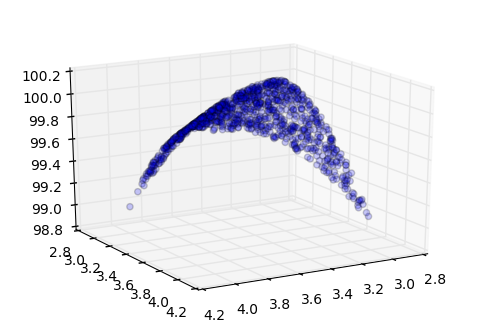 Now let’s define this gate and see whether our method of computing gradients and modifying inputs helps in increasing the output of this gate.

As expected, modifying the inputs a little bit in the direction implied by the gradients results in a higher output. Now let’s do this many, many times until the improvement or increase in the output is not significant anymore.

So far, we have demonstrated an application of the gradient descent method to optimize a single function by calculating gradients numerically via the getNumericalForwardGradient function. In practice, neural networks contain a large number of complex gates such that numerically computing the gradients every time becomes very expensive. Therefore, we often use analytical gradients, which are more accurate and computationally less demanding.

This raises the question: what if the expression is complicated such that the analytical solution for the gradient is hard to mathematically solve for. We will see that to deal with such situations, we can get away with computing the analytical gradient for some simple expressions and then applying the chain rule.

Let’s consider a gate that takes x, y, and z as inputs and outputs :

Image above has been taken from http://karpathy.github.io/neuralnets/

For inputs to this circuit x=-2, y=5, z=-4 it is straightforward to compute that

But in a more complex circuit, that gate might lead into multiple other gates before the output stage, so it is best to do the chain computation backwards, starting from the output stage. (Backpropagation)

Image above has been taken from http://karpathy.github.io/neuralnets/

Seeing as how we can use the chain rule, we may focus now on local gradients for some simple gates:

I just realized we haven’t coded in a while. Oops. Now we will code all that we discussed and see how backpropagation helps us calculate the same gradient using the chain rule.

Having defined the gates and units, let us run the forward pass to generate output values:

Now let us run the backward pass to decipher the gradient df/dx:

So now we’ve implemented backprop from scratch for a simple circuit, and seen how to obtain gradients of a larger circuit with respect to individual inputs using the chain rule backwards. That was fun!